One may ask what do the two figures can have in common. It’s better explained with a preamble.

Today I was reviewing a website (link no longer available, sorry) created by my protégé, when I spotted something that inspired me to write this post. As I usually do, I visited it using several browsers, to check if pages render correctly in all of them. When I opened it with Internet Explorer, all I got was the following message:

I’ve seen many websites declaring a browser preference, usually in the form of “this website is optimized for browser X, version Y”, but this is the first one that clearly rejects one so “harshly”. I know the author of the website and I’m aware of the reason why he decided to do it, but, personally, I don’t recommend taking such position.

The message reminded me of an (unfortunately) common issue in the world of Software Development: technological religion. This term can can be described as an almost-fanatic preference of a tool over another, and it explains the title.

Technology is not a religion 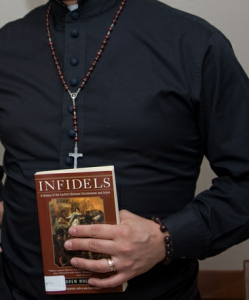 If your goal is preaching about the greatness of something above everything else, you’re in the wrong field. You should become a priest of some sort, as you’re not going to be any good in Development, and and up in joining the masses of fanatics like you. Linux is better than Windows, Android is cooler than iOS, iOS has a better interface, IE sucks, Firefox sucks, Chrome sucks… I’m hearing and reading this cr*p more often than I’d like, and it doesn’t bring anything good.

As a Professional, you will have the duty of being technology-agnostic. This means being flexible and open minded, while retaining your preferences. Bear in mind, there’s nothing wrong in liking some tool better than another. I also prefer to work with Firefox and Chrome when I develop websites, but I always keep in mind that I’ll have to make sure the final result will be compatible with the most common versions of Internet Explorer, Opera and Safari and on multiple platforms. I might not love it (far from it), but it’s a requirement, and I have to accept it.

Besides, have you ever met a carpenter who would “only use screwdrivers, because hammers suck”? If yes, please record him while he tries to screw nails into the wood and publish the clip. I guarantee you millions of visitors.

The consequences of “technological religion”

If you always worked alone, or only in groups with like-minded people, you probably won’t see much of a problem in being such a strong supporter (fanatic) of one or the other tool. However, once you’ll join a team with a more varied background, issues will start popping out like mushrooms in Autumn. You won’t always be allowed to choose what to use and when to use it, and you’ll have to adapt to project’s and team’s needs, in order to get the best out of every member’s skills. If not, you’ll be fighting against your colleagues most of the time, and, ultimately, you won’t achieve anything.

If you’d like to have an example of the disasters technological religion can cause, I wrote a post dedicated to it.

Be a Professional, not a Priest. Leave the Law of the Instrument to members of Mediocrity Clubs, and accept that you’ll have to wear more than a hat in your career. You’ll gain an open mind, flexibility and you’ll be able to face any challenge.