We are happy to inform you that the product base currency feature is now available again for variable products. We were forced to disable it some weeks ago, following the discovery of some limitations in WooCommerce 2.2 and earlier. When we found the issue, we immediately started working on it and we sent a fix to the WooCommerce team on the 23rd of January. The fix was integrated in WooCommerce core, and included in its latest release.

WooCommerce 2.3 received several patches shortly after its release, therefore we decided to wait until the dust settled to re-test the product base currency feature. We completed the tests last week, and we have been able to restore such functionality on sites running WooCommerce 2.3 or later (unfortunately, the WooCommerce team chose not to backport our fix to earlier versions).

How to enable the feature

Enabling the “product base currency” feature on variable products is simple. Just download and install the latest version of the Currency Switcher (it must be version 3.6.21.140227 or later) and make sure that you are running WooCommerce 2.3 or later. You should now see the product base currency feature (see screenshot below). 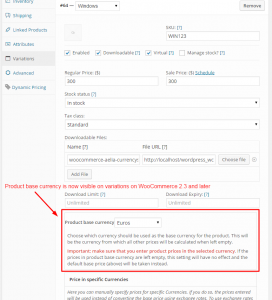 Product base currency is now available on variable products (requires WooCommerce 2.3 or later)

If you still don’t see the feature, it’s probably because your browser has cached the styles that hide it. In such case, simply reload the page using CTRL+F5 and the new user interface will appear.

Should you need further information or assistance, please feel free to contact us using our dedicated support portal. Thanks from the whole team for your continued support.

We are delighted to inform you that we are currently working on a new addon for our acclaimed WooCommerce Currency Switcher, which will allow to set shipping pricing manually, for each currency, rather than having them calculated using exchange rates.

With such integration, you will be able to configure a full set of shipping rates for each currency, and have them applied automatically, based on the selected currency. This new plugin will become available soon, and it will initially support the shipping methods included with WooCommerce. We are also planning to add support for the Table Rate Shipping plugin, by developer BolderElements, in a future release.

The Shipping Pricing plugin will make the WooCommerce Currency Switcher even better, and it will become the most comprehensive multi-currency solution on the market.  See you soon for the release!

We are happy to announce that we opened a new product section in our shop, containing add-ons for the popular Currency Switcher for WooCommerce 2.0.x/2.1.x. This section will contain small (and not-so-small) plugins which will extend the already flexible Currency Switcher, adding integration and compatibility with 3rd party products. END_OF_DOCUMENT_TOKEN_TO_BE_REPLACED 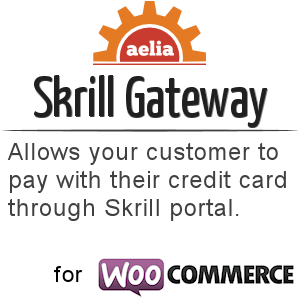 Christmas is coming, and here’s a great gift from the p2e/Aelia team. The Skrill gateway plugin for WooCommerce 2.0.x has been released and is available, completely FREE and with full compatibility with our acclaimed Currency Switcher plugin, for complete support of multiple currencies.

For more details about the plugin features, installation instructions, please go to the product page. Thanks for your continuous support on behalf of the whole team!

The Authipay gateway plugin for WooCommerce 1.6/2.0 has been released and is now available for purchase in our shop. This plugin will allow your shop to accept payments through the Authipay portal, which is managed by AIB (GB) Merchant Services, and supports most credit cards. END_OF_DOCUMENT_TOKEN_TO_BE_REPLACED

Looking back, it’s interesting to see how the Currency Switcher evolved from a “simple” currency conversion tool to a full multi-currency suite, with features such as Geolocation, multiple pricing, gateway management and more. Reaching such great result wasn’t easy: we faced difficult decisions, dealt with “surprises” caused by incompatibilities with 3rd party solutions and encountered bugs depending on edge cases that seemed to disappear as soon as we tried to troubleshoot it. It wasn’t easy, but we did it, also thanks to the invaluable feedback and suggestions given to us by our Customers. END_OF_DOCUMENT_TOKEN_TO_BE_REPLACED