Aelia Foundation Classes for WooCommerce has been updated to version 1.0.5.140611.

Aelia Foundation Classes for Easy Digital Downloads has been updated to version 1.0.4.140611.

The update is the same for both plugins, and it corrects the loading of plugin’s text domain. The fix will automatically apply to all plugins that rely on the AFC.

Simply click on the links above. The plugins are completely free. 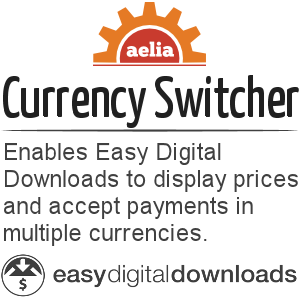 It has been a while since the last update, but we can say that 2014 has been a great year for our customers.

In February, WooCommerce 2.1 was released. Unfortunately, such new release broke backward compatibility with several plugin, including ours. We worked hard to fix all the issues that were reported, and we are proud to say that we made it before the estimated deadline. For this, we would like to thank our customers, who helped us spotting issues occurring in edge cases, that we could not have easily found by ourselves. END_OF_DOCUMENT_TOKEN_TO_BE_REPLACED